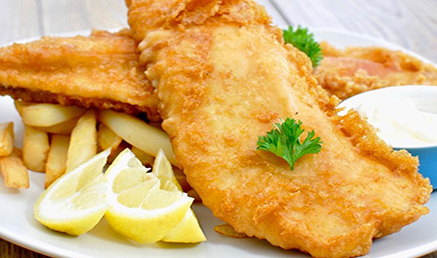 Tradition never goes out of style

At Fishers Restaurant & Takeaway, we are committed to providing only the best dine-in and takeaway Fish and Chips experience in London, after all, it is our passion. A British pastime and a bridge to the gap between rich and poor. Also, Fish and Chips being the most popular dish in Britain being enjoyed by one in six UK adults up to twice per week.

We wanted to know what keeps you coming back for more?

Well, Fish and Chips are often falsely accused of being an unhealthy dish. In fact, this accusation could not be further from the truth. Weighing in with three timeless fat than a Chicken Tikka Masala, Fish and Chips are a naturally high, valuable source of vitamins, iron, fibre and protein. Providing up to one-third of an adult male’s RDA (Recommended Daily Allowance) of vitamins, and almost half of the RDA in an adult female.

Fish contain a naturally high level of Omega 3 fatty acids, which has been shown to improve memory and promote better health. There have also been further studies into the benefit of fish for the prevention of Alzheimer’s and Dementia.

Although these studies are currently inconclusive we know that Dr. Laura Phipps, of Alzheimer’s Research UK, said in a recent interview that “The omega-3 fatty acids found in oily fish are an important part of a balanced diet and previous studies suggest they could play an important role in keeping the brain healthy. Which is important, a healthy mind equals a healthy body.

Just like no two chip shops are the same, we know that no two customers are the same. Each having its own signature version of the dish.

Accounting for six out of every ten portions of fish and chip portions in the UK Cod is the clear choice of the people.

At Fishers all our Cod comes from only Traceable and Sustainable Sources buying only well-sized and high-quality fish direct from the crisp Scottish Seas. We also take the same pride in the quality of our chips, freshly prepared on-site with no added preservatives and cooked in filtered oil, vegan and vegetarian-friendly fat, maintaining the potato’s natural taste and giving an unbeatable crisp texture.