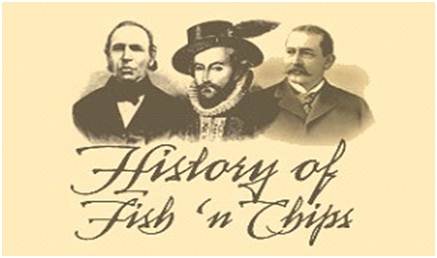 History of Fish and Chips

Fish and Chips is part of the staple diet of most Britons, a dish so powerful in the eyes of the nation it was deemed too important to be rationed during the Second World War. A dish that prepared our troops for battle.

How did this now billion-pound industry get started?

In a typical North, South rivalry the history of the first Fish and Chip shop is a widely disputed fact, over in the North it is claimed that the first chip shop opened in 1863 just outside of Oldham, while their Southern counterparts claim to have been three years ahead with a shop opening in London’s notorious East End around 1860. Mr. Lees sold fish and chips from a wooden hut in the market and later he transferred the business to a permanent shop across the road which had the following inscription in the window, “This is the first fish and chip shop in the world”.

However, in London, it is said that Joseph Malin opened a fish and chip shop in Cleveland Street within the sound of Bow Bells in 1860. Fish and chip shops were originally small family businesses, often run from the ‘front room’ of the house and were commonplace by the late 19th century.

When and where did this quintessentially British dish come about?

They sustained morale through two world wars and helped fuel Britain’s industrial prime. For generations, fish and chips have fed millions of memories – eaten with greasy fingers on a seaside holiday, a pay-day treat at the end of the working week or a late-night supper on the way home from the pub.

The potato is thought to have been brought to England from the New World in the 17th century by Sir Walter Raleigh although it is believed that the French invented the fried potato chip. Both Lancashire and London stake a claim to being the first to invent this famous meal – chips were a cheap, staple food of the industrial north whilst fried fish was introduced in London’s East End. In 1839 Charles Dickens referred to a “fried fish warehouse” in his novel, ‘Oliver Twist’. The populace soon decided that putting fried fish and chips together was a very tasty combination and so was born our national dish of fish and chips. The story of the humble chip goes back to the 17th Century to either Belgium or France, depending on who you believe. Oddly enough, the chip may have been invented as a substitute for fish, rather than an accompaniment. When the rivers froze over and nothing could be caught, resourceful housewives began cutting potatoes into fishy shapes and frying them as an alternative.

Around the same time, fried fish was introduced into Britain by Jewish refugees from Portugal and Spain. The fish was usually sold by street sellers from large trays hung around their necks. Charles Dickens refers to an early fish shop or “fried fish warehouse” in Oliver Twist (1839) where the fish generally came with bread or baked potatoes.

It has even been suggested that fish and chips helped win World War I. According to Professor John Walton, author of Fish and Chips and the British Working Class, the government made safeguarding supplies a priority. “The cabinet knew it was vital to keep families on the home front in good heart,” says Professor Walton. “Unlike the German regime that failed to keep its people well-fed and that was one reason why Germany was defeated. “Historians can sometimes be a bit snooty about these things but fish and chips played a big part in bringing contentment and staving off disaffection.

Through the latter part of the 19th century and well into the 20th century, the fish and chip trade expanded greatly to satisfy the needs of the growing industrial population of Great Britain. In fact, you might say that the Industrial Revolution was fuelled partly by fish and chips! The development of the steam trawler brought fish from all over the North Atlantic, Iceland and Greenland and the steam railways allowed the easy and fast distribution of the fish around the country. Fish and chips became so essential to the diet of the ordinary man and woman that one shop in Bradford had to employ a doorman to control the queue at busy times during 1931. The Territorial Army prepared for battle on fish and chips provided in special catering tents erected at training camps in the 1930s.

Fish, chips and mushy peas! There is nothing more British than fish and chips.

Freshly cooked, piping hot fish and chips, smothered in salt and soused with vinegar, wrapped in newspaper and eaten out-of-doors on a cold and wintry day – it simply cannot be beaten. Few can resist the mouth-watering combination – moist white fish in a crisp golden batter served with a generous portion of hot, fluffy chips. Everyone has their own preferences and tastes vary from one part of the country to another. Cod or haddock? Salt and vinegar? Pickled onion? Scraps?

So are fish and chips any good for us, nutritionally? Fish and chips are a valuable source of protein, fibre, iron and vitamins, providing a third of the recommended daily allowance of vitamins for men and nearly half for women. Magnus Pyke cites it as an example of a traditional dish once jeered at by food snobs and even censured by health food devotees but now fully appreciated as a nutritious combination.